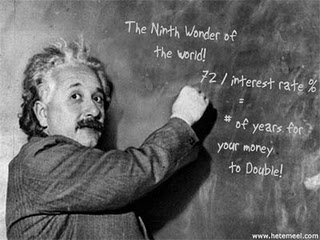 The Concept of Compounding

The key to this concept is the way in which, given enough time, even apparently trivial amounts of money can turn into sizeable sums. In other words, the longer you invest for, the more you benefit from the “snowballing” effect of achieving growth not only on the original amount you invested but also on all the growth it has achieved in the earlier years.

Lets’ quote an example which will show how much growth you might achieve with a monthly investment over 10, 20 and 30 years. For example, if you invest Rs.1000 a month in a fund that grows by 8% on a monthly compunding basis you will have Rs. 184,166 after 10 years. The benefit of Compounding is evident when you look at the returns over a period of 30 years – they are far more than eight times the value of a 10-year investment. In fact, the final value is nearly Rs. 15,00,000.

The powerful effect of compounding is another inportant reason why it actually makes sense to maintain a long term strategy, rather than changing your investments in response to the short term Market Movements.

Also Read: When is the best time to invest?

So, are you taking the full advantage of this miracle? If yes, then which channel have you invested your money to see the compounding magic work wonders for you?

1 thought on “The Miracle of Compounding Returns – The Eighth Wonder”